NIRMAN was created in 1988. Initially, the focus of the group was the education and training of women who worked at unskilled jobs for a pittance and had no scope for improving their situation. How could they be helped to literacy, to skills, and to an awareness of their larger rights and opportunities? We started a literacy and training centre in Banaras to address this issue. Most of the women who responded to our initiative were single mothers, separated, divorced, or widowed. Many of them brought their children along, and we started an after-school program for them.

Another round of research revealed a dismal level of teaching in all the schools that we observed in the city. Children were unhappy and not being taught in a way that would promise them a future. This was exacerbated by the communal tension that erupted in the city annually during the 80s and 90s. It seemed obvious that, in “provincial” India, little good teaching was available, either of skills or of values. Furthermore, the worst sufferers were always the economically impoverished families. The problems with schools were multiple and we had written about them extensively. We decided to start a school of our own.

Yet another crucial component in our thinking was our long familiarity with artisans. We found an antagonistic relationship between the arts and crafts, and education. When artisans adopted formal education, there was a violent wrenching away from their hereditary occupations and lifestyles; which, though salutary as “freedom”, had negative results because of the poverty of their education. The “educated” children of artisans typically ended up unemployed, or working as manual labourers, unskilled in any profession. The arts and crafts glorified as “Indian” were progressively on the way to being without producers, consumers, or patrons, except perhaps as rare global commodities. How could artisans benefit from mainstream schooling and still have a profession? How could the arts continue as living, real products, without marginalizing their producers?

Dr Som Majumdar, an economist and musician, took the plunge of addressing the concerns that had arisen from his and others’ research experiences. He formed NIRMAN, a society consisting of academics, professionals, artists, and concerned peoples, and with funding from the Ford Foundation, began the first project.

NIRMAN came to have the following component units: 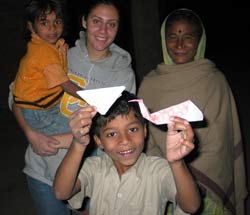 We have many projects in various stages of development. We welcome collaborations of all kinds, with individuals and organisations around the world.